Anexa is taking action to stop the spread of COVID-19.
Learn more...

The National Excellence Award in the company-client relationship is the maximum recognition to the strategy and administration of companies, institutions and/or areas of interaction with clients, distinguished by their excellence and by the way to take advantage of their opportunities.

The purpose of the award is to recognize these initiatives and efforts, which have impacted in a favorable way in the results of the operation, customer service, technology, human resources or in the positioning in the industry through the Implementation of innovative projects that become an example of management at national and international level.

Recognizes strategies of "Customer service”, demonstrating the ability of the organization to impact through the service in the fidelity, satisfaction, perception, loyalty and retention of its clients, as well as in those indicators that contribute to the increase of its profitability and/or that of its clients Contracting.

1. General information of the Organization

We are a company with 20 years of experience in the market of Call Center, always presenting solutions to satisfy the need of our clients.

VISION: To be the best alternative of Call Center in Latin America, through the development of the highly trained human resource, as well as the development of technological platform, in order to satisfy our clients in an ethical and socially responsible way.

The case presented in this report was developed in the Northwest Site, located in the city of Hermosillo, Sonora.

It was required to know the public’s opinion of those who watched on television the debates of the then candidates for the presidency of Mexico. Therefore, the challenge that was presented was, after the hearing has seen the different debates, to know the opinion of the voters of the performance of the candidates and of their possible vote for some of them through a poll applied by telephone , and also to have the ability to publish the results of the statistical sample of hundreds of outgoing calls in a maximum of 20 minutes after the transmission has been completed, delivering concrete and interpreted results.

These results were presented and used in different tables of televised analysis after the debate, in which the experts in addition to talking about what they perceived of the same, received our results to add them to the analysis and to the possible Result of the presidential contest. The result of this work was presented on TV nationwide, as well as published in various print and electronic media the day after the debate.

Description of the project

After each debate, people of voting age were called to measure the real trend of preferences toward a presidential candidate. The work consisted in contacting representative electors and carrying out five questions, capturing their replies and, within 30 minutes after the end of the debate, issuing reports with the results, publishing them and delivering them to the client in the format E Interpretation requested. The calls had to be made five minutes after the end of the debate and had to be completed in a maximum of 20 minutes. The speed was imperative, as the results would be presented by political analysts on national TV immediately after the discussions.

Objective of the project

The objective was that, through national television, citizens immediately knew the perception of a representative sample of the population regarding what could be the result of Election day. For most citizens it was extremely important to know who could be the new president of the country, because many decisions are impacted by this result. For our client, the objective was to obtain a statistical sample and publish the results immediately to maintain its credibility with its readers and advertisers.

When we hear the customer request,Found Several Challenges To overcome, Between them, that the debates would be carried out On Sunday in the night time, the number of questions to ask was reduced and The speed with which Is ShouldN conducting the polls was imperative, just as the Delivery of results and interpretation in the time that the customer requested.

A special system for this project was developed by the Department of Systems Development, With a platform Extremely friendly and Reporting capacity Online, To which I had access and Client so that they could download them, format them With the results and present them From their offices. were used bases of data from CDMX, Guadalajara and Monterrey With a segmentation of 60% women and 40% men. The campaign was implemented with Pre-departure calls for Interview To electors with two objectives: 1) Identify if you were interested in participating, Your sex, validate your intent to vote and,2) Request permission to call At the end of the discussions and I mentioned the schedule (Sunday night) Dear. In this way electors were identified to participate Until Whether Have the number of people That was required.

Pre-debate (24hrs. Before, because confidentiality was not given access to questions) the survey system was scheduled With simple capture options and It Enlazó To the recording system.EThe day of the debate, Training was given to 120 agents previously Selected to ensure a short call duration: As the time to emit results was 20 minutes, And With 120 agents on average,Everyone would survey At least To 5 people, with A Duration of 90 sec.,sand used predictive marker to expedite calls and it was As It logró Meet the number of surveys With the right segmentation And the delivery time of the results.

Selected performance indicators, obtained before and after the project: 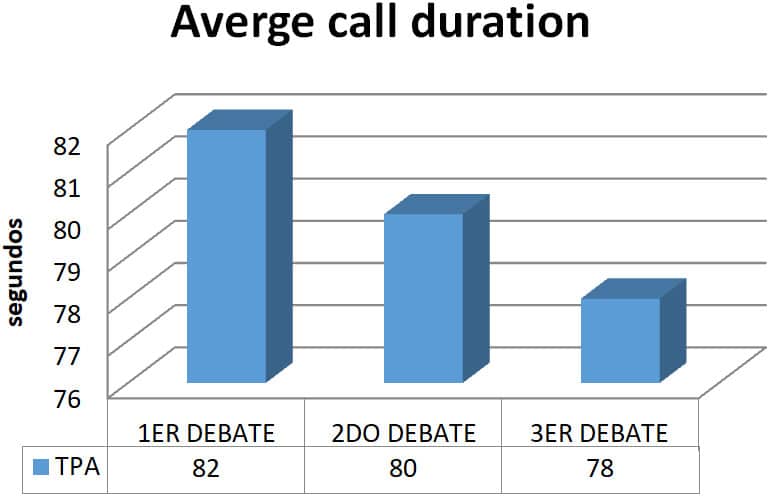 The client was very satisfied because, due to his business turnaround, he did not have the infrastructure or the experience to carry out the surveys in such a short time.

The results were widely disseminated by mass media nationwide, with the assurance that the audit process was 100% reliable, error-proof and with final results at the time the last survey was closed.  The whole exercise was backed up in voice and data in order to be audited by the authorities in case it was required.

Additionally, the results obtained in this project had a precise alignment with the results presented by the large survey companies of the country on the same subject in the same time frame, which proved that the segmentation used was correct.

The company's experience of more than 20 years allowed us to integrate in less than a week a customized solution, showing expertise in the planning and organization of the staff, as well as in the integration of systems such as call recording and screen , predictive marker, real-time survey and reporter system, all available in the cloud and tailored specifically to the particular needs of the project.

Today this project represents a good example for other clients of the execution capacity that we have. The client who had gone through other options without finding what he was looking for, and today is a satisfied customer and loyal to our company.

Typically these projects and surveys are executed with high times of planning, execution and presentation of results. We, thanks to the integration of Contact Center's own tools, managed in less than a week to meet the project requirements and achieved flawless execution at the time of implementation.

The management tools we have and their integration also allowed the agent's intervention to be exclusively to obtain the opinion of the respondent, leaving to the technology the work of recording, interpretation and presentation of results Totally online. The client at all times had access in real time the advancement of the surveys, city of origin, sex, results by question and all the crosses of variables that were had to determine the exact opinion of the sample surveyed. When the last poll call was hung, the online result at the time was the final result.